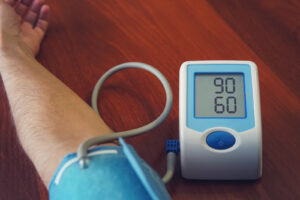 Hypertension, or high blood pressure, is one of the most common health issues affecting Americans today. With an estimated 70 million Americans suffering from this condition, this makes up one third of the entire adult population in the US. When you consider that 1 in 5 people who suffer from hypertension are not even aware that they have it, that’s scary stuff. Thankfully, chiropractic care can help.

If you have a blood pressure of 180/110 or higher, seek emergency medical care immediately!

What Does Hypertension Actually Cause?

In 2013, according to the CDC, over 360,000 Americans died with hypertension listed as an immediate or contributing cause of death. It’s also a warning sign for future catastrophic health events such as heart attack, stroke and heart failure. Also, according to the CDC, between 70% and 80% of Americans who have experienced these conditions also have hypertension. Additionally, hypertension is considered the second most common cause of kidney failure. The effects can be pretty far-reaching.

How is Hypertension Treated?

While the most common method of treating hypertension is through the use of prescribed medication, it has long been thought that blood pressure can and should be managed using alternative methods first. The most important management method consists of lifestyle changes like quitting smoking, limiting caffeine and alcohol, eating healthy, exercising regularly and managing stress. In combination with this, chiropractic care can also help.

How Can a Chiropractor Help?

According to a study published in the Journal of Human Hypertension in 2007, a chiropractic adjustment of the vertebrae located just at the base of the skull can have a dramatic effect on blood pressure. This study measured blood pressure levels of fifty patients before and after the adjustment, as well as eight weeks later. Patients still demonstrated benefits to their blood pressure measurements that long after their adjustments.

If you’re concerned about your blood pressure and want to manage it now without taking unnecessary and expensive medications, give us a call today at 305-761-6528. While these medications can be lifesaving, many people are taking them before it is necessary. Let us work with you and your doctor to help effectively manage your blood pressure now and live a longer, healthier life!